I was put in touch with Miss Agnes Rennie by her niece, Anne Stewart, who lives in Machrihanish. Agnes, now 94 years old, was born in Helensburgh in 1920. Her grandfather, whom she never met, was a miner, as were some of her maternal uncles. As I understand it, her Grandfather Shearer was from the Dennyloanhead/Longcroft area in Falkirk.

As a young woman Agnes studied Institutional Management at Glasgow College of Domestic Science, popularly known as “The Dough School” which was situated just next to Kelvingrove Park. Her first jobs were in hospitals, including Gartnavel Hospital, in the west of Glasgow. She then spent approximately 30 years with the NCB (National Coal Board). Agnes was based in Alloa and was in charge of supervising the catering/canteens in collieries all across Scotland. The area manager at the time was a Mr Lang, who had worked his way up from being a miner and, according to Agnes, was a very considerate person to work for. This work involved Agnes and her assistant, Pat Angus, visiting Argyll Colliery roughly every 6 weeks. She made the journey by plane and thinks that she stayed at the Argyll Hotel in Campbeltown.

When in 1958 spontaneous combustion caused a fire to break out at the Machrihanish mine, a dedicated rescue team was brought from Coatbridge by the NCB to assist the Argyll Colliery workforce. This operation meant keeping the canteen open 24 hours a day, so Agnes and her assistant were told to pack their bags for the long drive to Kintyre to organise the opening of the canteen. Here she worked alongside the local women who ran the canteen on a day-to-day basis and served the men who were fighting the fire. Agnes describes how the team who were brought in were catered for at the expense of the NCB. Agnes, off her own bat, also supplied the men from Coatbridge with writing paper, envelopes and stamps so that they could write home to their families.

Typical meals provided were soup, mince and potatoes, stew; followed by tart and custard. “Pieces” were made up for the men to take underground. There was home baking in the canteens too; scones, pancakes etc. Agnes thinks that on this occasion she was there for three days and that she stayed at the Ugadale Hotel in Machrihanish. She also remembered that she visited the Argyll Colliery when it was in the process of being closed (1966).

Agnes says as a young women she never imagined that she would end up working with miners but went on to say that she loved her job, and that, although many people looked down on colliery workers, she thought that they were “the salt of the earth”. She remembered the men as always being very pleasant and that she enjoyed her visits to Campbeltown and was at pains to say that the women who ran the canteen at Argyll Colliery did a very good job.

Horrified by recent and not so recent events in Mexico I was more than willing to make a piece of work in response to Mexican artist, Valeria Gallo’s initiative, #IlustradoresConAyotzinapa, which was for artists (both professional and spontaneous) to put a face to the 43 students from the Escuela Normal “Raul Isidro Burgos” in Ayotzinapa.

The students were forcibly disappeared at the hands of the police on the 26th September – A mass kidnapping which led to the brutal disappearance of these young men who were training to become teachers.

At least 25,000 people have been disappeared in Mexico over the last two presidential terms (and these are official statistics). Whist the disappearances have taken place all over the Republic, Guerrero, one of Mexico’s most impoverished States, has been blighted by violence, killings, and disappearances and terrorised by organised criminal gangs.

I number of years ago I travelled around Guerrero to meet popular artists from that part of Mexico. Other foreigners there at that time, with the exception of those visiting Acapulco, seemed mostly to be human rights observers. The situation wasn’t great but since then violent oppression has escalated in a way that I could never have imagined.

On the occasions I went to Guerrero, I met musicians from La Costa Chica who demonstrated a direct link with their African ancestors who had been runaway slaves. I met lacquer artists like Francisco “Chico” Coronel, from the town of Olinalá, and travelled to Temalacatzingo to meet the people who made the wooden animals I had been collecting since I started travelling to Mexico. There were many mask makers amongst whose zoomorphic masks, “El Tigre” (the Jaguar), was king. I have seven paintings on my wall by Jesus Lorrenzo, from Xalitla, which I love.

In towns and villages like Tlapa de Comonfort, Xochistlahuaca and Ometepec, near the border with Oaxaca, I met indigenous women who were talented embroiderers and who often invited me, a lone woman traveller, into their homes for a bowl of soup and tortillas.

I found the Guerrenses to be kind and welcoming. And I loved the rich diversity of their culture. I have so much affection for that part of the world and its people (and for all the other parts of Mexico that I have visited over the years). So when I heard the news of the mass kidnapping I felt sickened to the core. To see how events unfolded: the ongoing discovery of many mass graves around Iguala, the alleged role of the mayor of Iguala, Jose Luis Abarca and his wife, Maria de Los Angeles Piñeda, and her association with the criminal gang Guerreros Unidos, and their subsequent involvement in the abduction of the students… all seemed to unravel like some kind of unbelievably grotesque Telenovela.

It’s not that I haven’t been aware of the dreadful increase in violence and disappearances that has happened in Mexico over the last 8 years but the events of Caso Ayotzinapa have really gotten under my skin – as it seems to have for all of Mexico and internationally. Now is really is the time to say enough – ¡Basta ya! Now is the time to say, Todos somos Ayotzinapa – we are all Ayotzinapa. Mexicans are sick of the violence and you will see “Ya me cansé” on banners everywhere.

All over the Republic of Mexico there are protests, marches, vigils, tributes, artworks, banners, actions, altars – all dedicated to the 43 students and all that they represent: they are symbolic of all of the murdered, the disappeared and the trafficked. What I take heart in is the resilience of ordinary Mexican people. We have to stand by them and offer them whatever solidarity we can – no action is too small. If you do nothing else, tell a friend.

We still don’t know the true fate of the students although there have been arrests and confessions which are discredited because the detainees were tortured.

When choosing the subjects for the two pieces I have made for Ayotzinapa, I chose Jorge Aníbal Cruz Mendoza (19 years old) and Jorge Luis González Parral (21 years old). Why? How do you choose from 43 when all of them have the same right to justice? Well I suppose I wanted to show just how young they are, boys from the same wee village, Xalpatláhuac, just at the beginning of their adult lives, boys who, under other circumstances, who would become teachers and go on to have families.

The Virtual Quilt for Ayotzinapa: A Tribute to the disappeared.

Andrea and Victoria state, “We hope to gather the work of as many artists from around the world as possible, to create a VIRTUAL QUILT for an online exhibition project that might potentially be exhibited in galleries in New York and beyond.

“Just as the Aids Memorial Quilt brought attention to the AIDS epidemic, we hope to bring public attention to another epidemic – the loss of innocent lives lost to the drug war, poverty, and migration.”

If you are interested in participating please get in touch with Andrea and Victoria. Works should be 8″ x 8″ and be 300 dpi and should be sent to: 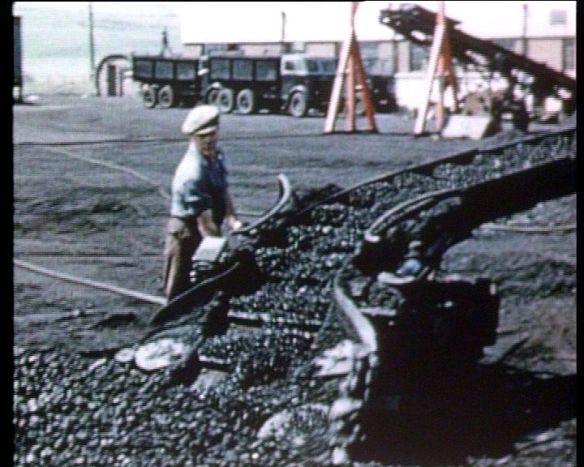 I have started a series of portraits/drawings of people who worked at Argyll Colliery, Machrihanish. These will form a body of work for an exhibition and will be a tribute to the workers. My intention is not only to include the men who contributed to The Road to Drumleman but also want to involve anyone who was too shy to participate or who simply slipped through the net because I had so little in the way of resources for the film project. If there is any who wishes to be portrayed/included or if you know someone who may be interested please contact me. You can do so via this blog, The Road to Drumleman Facebook page or contact me email: jan@jannimmo.com You can also see the drawings as they progress on this Facebook page and here on the blog. Many thanks!

I have just added more new drawings to the Retratos Serranos collection I’ve been working on. 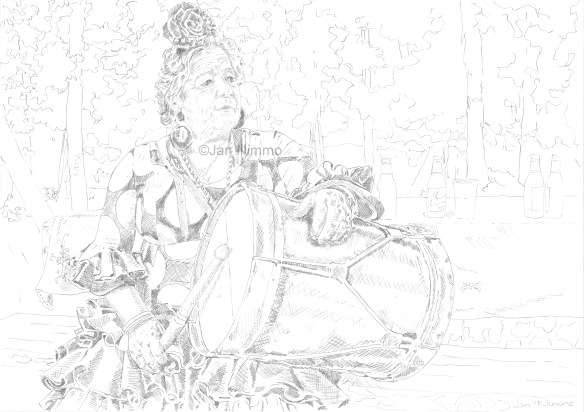 Yesterday we held a short and modest vigil for the 43 disappeared students from Ayotzinapa, Guerrero, Mexico at Kelvingrove Square, Glasgow. I’m hoping to plan more, better attended vigils in the run up to the New Year… in the meantime here are a few rather dark photos from a wet and windy Glasgow. 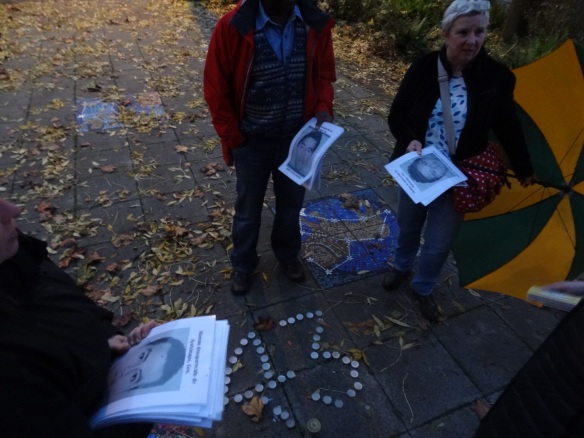 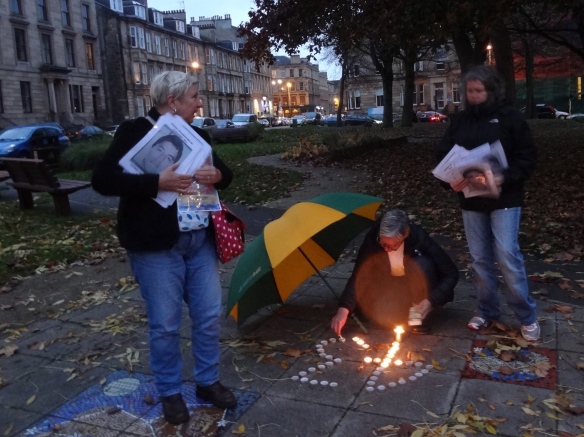 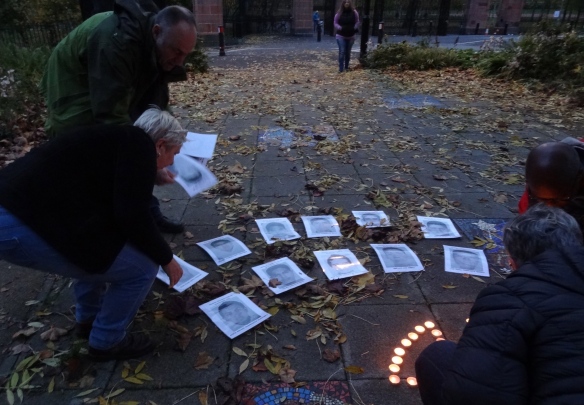 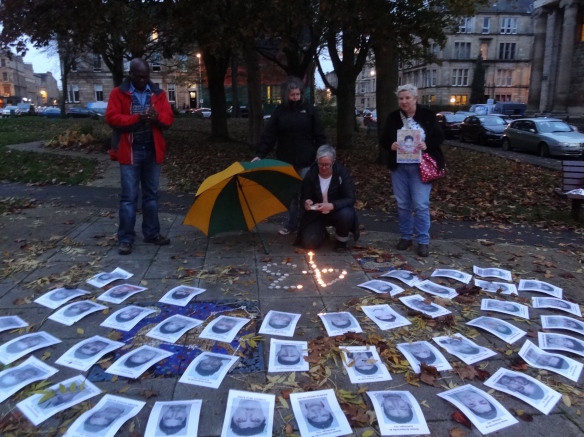