I was put in touch with Miss Agnes Rennie by her niece, Anne Stewart, who lives in Machrihanish. Agnes, now 94 years old, was born in Helensburgh in 1920. Her grandfather, whom she never met, was a miner, as were some of her maternal uncles. As I understand it, her Grandfather Shearer was from the Dennyloanhead/Longcroft area in Falkirk.

As a young woman Agnes studied Institutional Management at Glasgow College of Domestic Science, popularly known as “The Dough School” which was situated just next to Kelvingrove Park. Her first jobs were in hospitals, including Gartnavel Hospital, in the west of Glasgow. She then spent approximately 30 years with the NCB (National Coal Board). Agnes was based in Alloa and was in charge of supervising the catering/canteens in collieries all across Scotland. The area manager at the time was a Mr Lang, who had worked his way up from being a miner and, according to Agnes, was a very considerate person to work for. This work involved Agnes and her assistant, Pat Angus, visiting Argyll Colliery roughly every 6 weeks. She made the journey by plane and thinks that she stayed at the Argyll Hotel in Campbeltown. 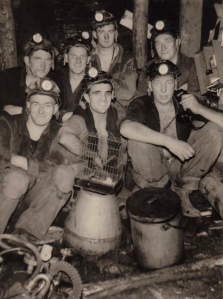 When in 1958 spontaneous combustion caused a fire to break out at the Machrihanish mine, a dedicated rescue team was brought from Coatbridge by the NCB to assist the Argyll Colliery workforce. This operation meant keeping the canteen open 24 hours a day, so Agnes and her assistant were told to pack their bags for the long drive to Kintyre to organise the opening of the canteen. Here she worked alongside the local women who ran the canteen on a day-to-day basis and served the men who were fighting the fire. Agnes describes how the team who were brought in were catered for at the expense of the NCB. Agnes, off her own bat, also supplied the men from Coatbridge with writing paper, envelopes and stamps so that they could write home to their families.

Typical meals provided were soup, mince and potatoes, stew; followed by tart and custard. “Pieces” were made up for the men to take underground. There was home baking in the canteens too; scones, pancakes etc. Agnes thinks that on this occasion she was there for three days and that she stayed at the Ugadale Hotel in Machrihanish. She also remembered that she visited the Argyll Colliery when it was in the process of being closed (1966).

Agnes says as a young women she never imagined that she would end up working with miners but went on to say that she loved her job, and that, although many people looked down on colliery workers, she thought that they were “the salt of the earth”. She remembered the men as always being very pleasant and that she enjoyed her visits to Campbeltown and was at pains to say that the women who ran the canteen at Argyll Colliery did a very good job.

I have started a series of portraits/drawings of people who worked at Argyll Colliery, Machrihanish. These will form a body of work for an exhibition and will be a tribute to the workers. My intention is not only to include the men who contributed to The Road to Drumleman but also want to involve anyone who was too shy to participate or who simply slipped through the net because I had so little in the way of resources for the film project. If there is any who wishes to be portrayed/included or if you know someone who may be interested please contact me. You can do so via this blog, The Road to Drumleman Facebook page or contact me email: jan@jannimmo.com You can also see the drawings as they progress on this Facebook page and here on the blog. Many thanks!