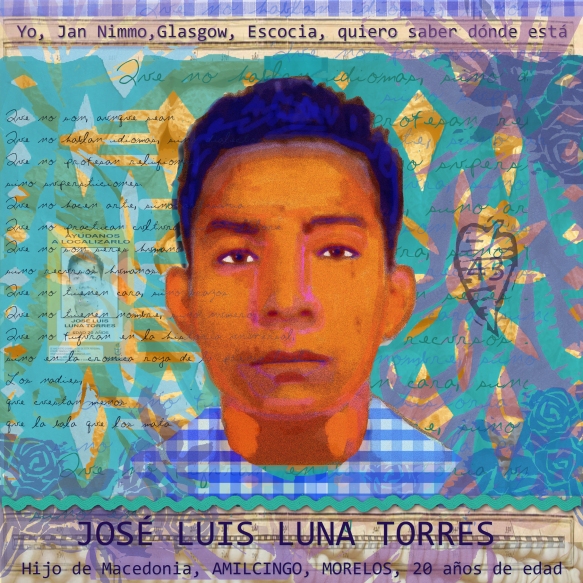 José Luis Torres is from a small indigenous town, Amilcingo, in the Mexican State of Morelos, close to the border with Puebla. José Luis was unable to study locally so he matriculated at the Escuela Normal “Raúl Isidro Burgos” in Ayotzinapa, Guerrero.

His mother, Macedonia, describes herself as both mother and father to her children, as she is a widow with 7 children. She makes ends meet by roasting and selling peanuts and elotes (sweetcorn).

Before José Luis was forcibly disappeared along with 42 fellow students in Iguala, on the 26th Sept 2014, he’d help his mother out roasting peanuts, amongst other chores. He worked on the land or as a builder’s mate. The family struggles to get by. His brother, Sósimo describes how his José Luis wants to get an education so that he’ll be in a better position to help the family out. He and his brother are just like two peas in a pod.

Jose Luis is one of six Moralenses that went to study in Ayotzinapa. Two of his fellow students, Carlos and Armando, were present on the night when police attacked the students. Carlos says that at first he thought the bullets were rubber bullets. They recall the chaos; everyone running to escape and not one but two balaceras (shootings). Armando wonders aloud about where is his classmates are, what has happened to them, his voice trembles as he speaks.

Jose Luis’s sister, Marisol, describes his disappearance and the feeling of not knowing his whereabouts as being like “dying little by little”.

Making this portrait has coincided with the death of Uruguayan writer, Eduardo Galeano, from whom I learned so much about Latin America. I have included some lines from his poem “Los Nadies” – “The Nobodies” (at the bottom of this post). José Luis is someone, not nobody. A name not a number.

On the 4th of December 2014 Galeano wrote in La Jornada about Ayotzinapa:

The orphans of the Ayotzinapa tragedy aren’t alone in the persistent search for their loved ones, lost in the chaos of the burning rubbish dumps and graves full of human remains.

They are accompanied by the voices of solidarity and their warming presence across the whole map of Mexico and further afield, including the football stadia where players celebrate their goals drawing the number 43 with their fingers in the air, in homage to the 43 disappeared.

Meanwhile, the President, Peña Nieto, recently returned from China, warns, in a threatening tone, that he hopes that he won’t have to use force.

Moreover, the President condemns “the violence and other abominable acts carried out by those who have no respect for law and order”, although he didn’t clarify that these delinquents could be useful in making up menacing speeches.

The President and his wife, la Gaviota, to give her stage name, are deaf to anything they do not want to hear and live in solitary splendour.

The unequivocal ruling of the Permanent Tribunal of the People declared at the end of three years of hearings and thousands of testimonies: “In this world of impunity there are murders with murderers, torture without torturers and sexual violence without abusers.

In the same vein, the statement from the representatives of Mexican culture warned: “The rulers have lost control of the fear; the rage they have unleashed is turning back against them’.

From San Cristóbal de Las Casas, the EZLN (National Zapatista Liberation Army) summed it up: “It is both terrible and marvellous that the poor who aspire to be teachers have become the best educators, who, with the power of their pain transformed into a dignified anger, so that Mexico and the world wake up, question and ask for answers”.

Fleas dream of buying a dog
and the nobodies dream of getting out of their poverty,
that some magic day
suddenly good luck will rain upon them
that it will downpour bucket-fulls of good luck.
But good luck doesn’t rain today
or tomorrow, or ever,
not even a little drizzle falls from the sky.
No matter how much the nobodies cry for it
and even when their left hand itches
or they get up on the right foot,
or when they start the year with a new broom

the nobodies: the sons of nobody
the owners of nothings
the nobodies: nothings
chasing after the hare,
dying all their lives
Fucked and double fucked
Who don’t speak languages, but dialects.