José Eduardo, the son of a bricklayer, comes from Tixtla, Guerrero and is a first year student at the Escuela Normal “Raul Isidros Burgos” in Ayotzinapa. He was 19 years old when he was disappeared alongside 42 of his fellow students on 26th September 2014 in Iguala. There is more background information on “Caso Iguala” and why I am making these artworks in a previous post.

I have translated the following from an article by Rosa Emilia Porras Lara for El Milenio Digital to give some background on José Eduardo’s family:

The mother of José Eduardo Bartolo Tlatempa asks, over and over again “Where is my son?”. None of her family dare to tell her that no one knows.

José Eduardo Bartolo Tlatempa, a first year student at the Normalista Teacher Training School in Ayotzinapa, Guerrero, is one of 43 students who were disappeared on 26th September 2014.

In an interview with El Milenio newspaper, Aunt Ana Celi tells of how Eduardo’s mum isn’t aware that her son has been disappeared.

“My sister is in hospital because she has cancer. She doesn’t know what’s happening, none of us dare tell her that Eduardo hasn’t appeared since he went to Iguala. She simply asks, “Where is my son?” to which we reply, “With us”.

Eduardo’s aunt was in Mexico City the previous Friday, as part of a delegation that was received by Luis Enrique Miranda, Vice-Secretary of the Interior Ministry, to ask for his support in the search to locate the whereabouts of students.

Ana Celi says that Eduardo left for school as usual on the 26th. He said he was going to Iguala to collect funds so that they could go on the march on the 2nd October (to commemorate the 1968 student massacre in Mexico City).

“Friday 26th was the last time we saw Eduardo. The plan was that they were going to communities around Iguala the following week, and for that reason they also needed money.”

Ana Celi, is sure that the municipal police started to follow the young students as soon as they started collecting money.

“The students who got away alive have said that the police followed them all the time and didn’t let them out of their sight, and when the students were leaving, the police attacked them with without any motive. Many of those who were injured are critically ill as they were shot in their vital organs and we want justice for them”.

Eduardo’s aunt directly accuses the municipal police in Iguala and also organised crime gangs for the disappearance of the students.

“Of course those who are involved in organised crime are behind this, as well as the Mayor of Iguala; they are all linked to one another. They have done this because it doesn’t suit them to have educated young people around.”

Ana Celi insists, “We know that they are alive, probably badly beaten and for that reason they don’t want to show them”.

Since then I understand that Eduardo’s mother’s cancer has been in remission. The whereabouts of the students is still unknown with one exception – Alexander Venancio Mora – whose remains were identified (from a 1cm fragment of bone and a molar found in Cocula) by Argentinian forensic scientists.

You can see a short video report with the families by James Fredrick for The Guardian here.

Have postponed today’s drawing to do this piece of work first – in solidarity with the Mexican illustrators and artists who are raising awareness about the the 43 students from Ayotzinapa, Guerrero who were “disappeared’ last month in Iguala. The idea is for artists to focus on missing individuals rather than their just being a nameless statistic. I have chosen Jorge Aníbal Cruz Mendoza, who is only 19 years old. I’m asking for JUSTICE for the students, their families and for all the other unidentified victims of forced disappearances and for those buried in clandestine graves in the hills that surround Iguala.

Love and Solidarity from Scotland. 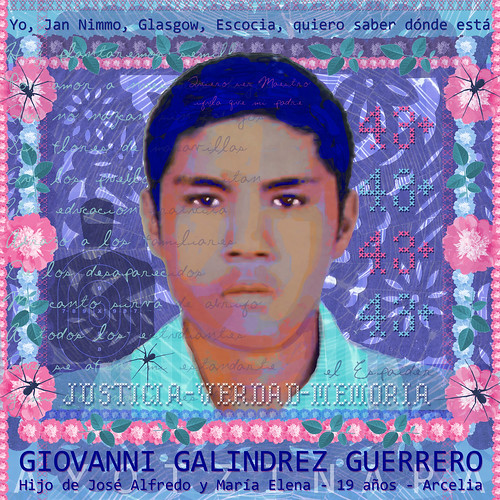